From the Bottom of Your Grandfather's Sock Drawer 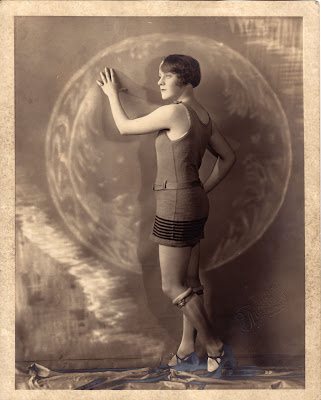 Here are two recent acquisitions. The first, above, is a promotional photograph of young actress, or possibly a dancer, circa 1925. It was taken the Theatrical Studio, at 359 N. Clark Street in Chicago. The bathing suit is interesting considering that she's also wearing shoes with rolled stockings (a big fad in the 20s; Louise Brooks made a film by that title, and I have another piece of vintage cheesecake coming featuring the same fetishy style.)

The second is a bit more risqué, though it's still quite innocuous by 21st century standards: 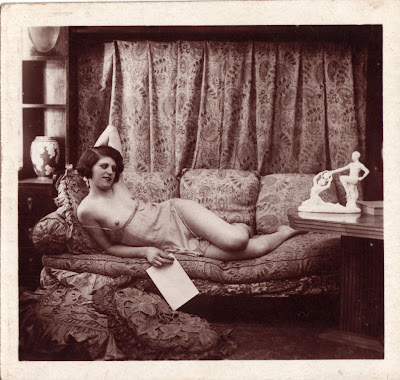 This one definitely falls into the category of erotica, expertly shot in luxurious surroundings. It's a tiny image, about two inches across; Grandpa (or Grandma, in some cases) would have had to hold it quite close to his face using his left hand. As ever, CLICK TO ENLARGE! You won't be sorry. (Carole P., I'm talking to you.)
Posted by Scott Phillips at 11:17 AM