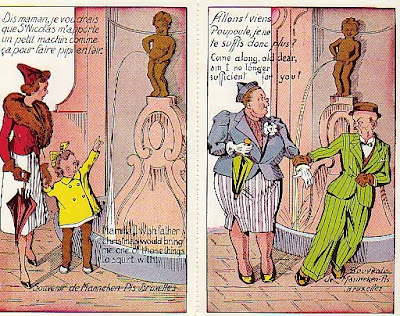 These are two of a series of twenty slightly ribald postcards featuring the Manneken-Pis of Brussels, possibly the world's most disappointing tourist attraction. As the above cards show, it's a tiny statue of a little boy pissing into a fountain. No one really knows why it's there, though it's been suggested that it commemorates a kid putting out a fire in a similar manner. Anyway, since the early twentieth century these postcards have been on sale across the street. Mostly they feature older ladies--nuns, spinsters and unsatisfied wives--gazing longingly at the little bastard's junk.
Posted by Scott Phillips at 2:04 PM