Poster of the Day 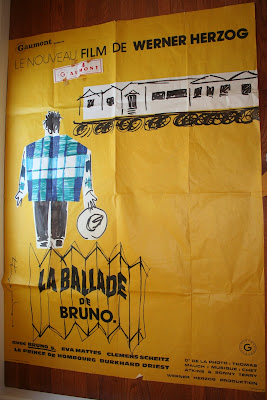 Click as always to enlarge. I picked up this four sheet in Paris sometime in the early eighties. It's enormous and I have no place to hang it but someday I'll get all these framed (more to come). This is for the French release of "Stroszek," starring Bruno S. (hence the title "La Ballade de Bruno"), one of my favorites of all time. Shot mostly in Eddie Gein's hometown of Plainfield, Wisconsin! Apparently Herzog and Errol Morris hatched a scheme during the shoot to dig up Eddie's mother, a plan that came to nought.
And music by Chet Atkins and Sonny Terry!
Posted by Scott Phillips at 12:26 PM