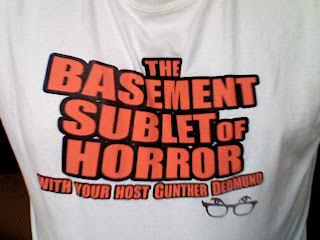 My good pal Joel Sanderson is the creator/producer/film editor/star of the greatest TV Horror show ever, The Basement Sublet of Horror. Check it out if you dare: http://www.basementsubletofhorror.com/
I've guest starred on two episodes, once as psychotic, pilled-up country western legend Tex LeBeauf, beamed down to the sublet by the nubile female aliens who've kindly adopted him, and once as Gunther Dedmond's sinister landlord. Every episode I've seen is a gas, and Joel's inventive re-imaginings of the D-movies he's recut are works of art in themselves.
Posted by Scott Phillips at 9:42 AM