I just had the privilege of being a juror for the New Filmmakers Showcase at the St. Louis International Film Festival and I'm pleased to say that the film we selected out of five entries was "St. Nick," directed by David Lowery and starring Tucker and Savannah Sears as two preteen runaways who move into an abandoned house and try to make it their home. Lowery has been compared , rightly, to David Gordon Green and Terence Malick, but watching the film I thought of Albert LaMorrisse's "the Red Ballon" and René Clément's "Forbidden Games." Apart from those two I can't think of a movie that captures so well a child's point of view, unsentimental and inventive. Moving slowly and with very little dialogue, it won't please everyone, but I predict great things from Lowery. Some distributor should pick this up fast.
Posted by Scott Phillips at 10:36 AM 3 comments: 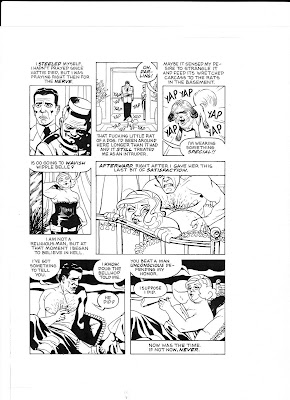 Here's an inked page from the forthcoming, untitled comic I'm working on with Roger Petersen....ain't it purty? We're still looking for a title, something hotel-related....
Posted by Scott Phillips at 2:34 PM 14 comments: